Meditations for healing ourselves & others weekend

Meditations for healing ourselves & others

This ancient meditative practice is the best way to transform all types of difficulty such as pain, illness, anxiety — into an opportunity to strengthen our inner peace, love and compassion.
Taking and giving is a beautiful and profound method to transform our personal problems and the sufferings in this world into the very means for experiencing love, joy, compassion and wisdom. This ancient practice brings mental peace and happiness, increasing our spiritual strength and capacity to overcome challenges while developing the supreme good heart of a Bodhisattva.

This course is suitable for everyone regardless of experience.

Ordained as a monk in 1997 by Venerable Geshe Kelsang Gyatso, Gen Jigme has studied, practised and taught Kadampa Buddhism under Geshe Kelsang’s guidance in major Kadampa Centres throughout the UK for many years. He shows a humble, kind example as a practitioner and his clear explanations of Buddha’s teachings give us the confidence to practise them in our daily life. 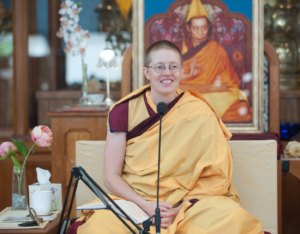 Gen Tubchen has been a dedicated, close disciple of Venerable Geshe Kelsang Gyatso Rinpoche for many years, receiving ordination from him in 2003. An inspiring and gifted teacher, she is loved for her clear, powerful and practical teachings and her insightful retreat experience. She has a deep wish to share the benefits of meditation with others and her teachings touch the hearts of listeners and illuminate the profound meaning of Dharma.